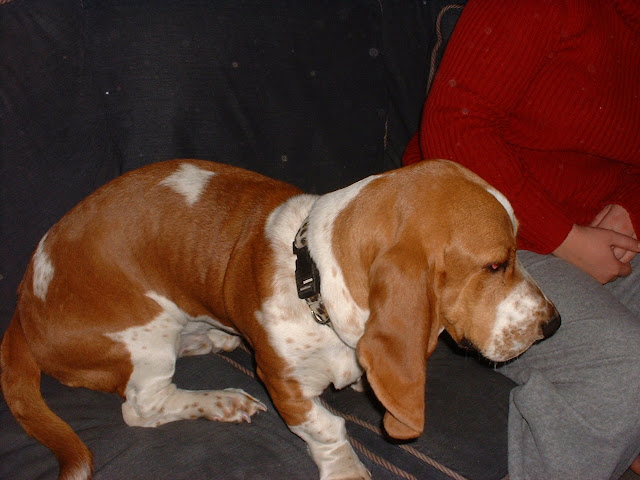 That is Walter, one in every of my favourite animals in my life.  He’s a basset hound that daughter Tami and her husband obtained in about 1998 early of their marriage.  This photograph was taken in about December 2000, most likely at their house in Lengthy Seashore.
Walter was so lovable, and so slobbery, and so nice a canine.  He cherished to eat, to go on walks, to smell all the pieces alongside the way in which, go to the canine park, and have his stomach rubbed.  Everyone was his buddy.  After they lived in Lengthy Seashore, they’d go for walks daily on Second Avenue and Walter was an actual chick magnet.  Each younger woman needed to pet him and he loved each minute of it.
Tami joined the native Basset Hound Rescue and wrote a column known as “Walter’s Whimsies” for years of their e-newsletter that was hilarious and inventive.  They even marched in a Rose Parade as I recall (hmmm, possibly it was a neighborhood parade?).
Sadly, Walter developed most cancers later in life and was misplaced to the household.  He was our first grandhound, and our greatest grandhound.
=============================================
The URL for this publish is:
Copyright (c) 2021, Randall J. Seaver

Please touch upon this publish on the web site by clicking the URL above after which the “Feedback” hyperlink on the backside of every publish. Share it on Twitter, Fb, or Pinterest utilizing the icons beneath. Or contact me by e mail at randy.seaver@gmail.com.