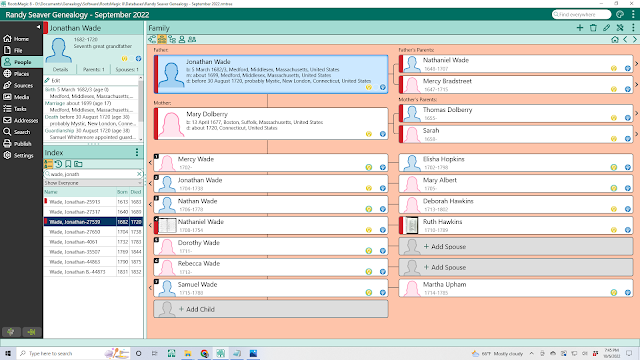 1)  PERSON (with source citations as indicated in brackets):

“…that y^e rest of my Estate remaining be thus divided, one third part to my three daughters Mercy Bradstreet, Anne Wade & Dorothy Willis, equally every one their equal share, & that the other two thirds be divided betwixt my two sons Jonathan Wade & Samuel Wade after this manner viz that my son Samuel shal have three parts, to my son Jonathan two parts. And it is to be understood that what these my sons, or daughters have, already received of their portions, as also what my daughter Anne Wade is to receive at my decease, shal be computed as so much of their share, & every ones part to be made up proportionably according to the above stated rule of division. And that my son Jonathan Wade & Samuel Wade, shal freely (at this time & from my decease, til the time of division shal come) enjoy & possesse the brickyard & ???? ground adjacent.”